People are at the heart of any relationship, and the honest and open hearts of those people is what makes the difference in any relationship. Those of us lucky enough to travel to our Partner Church in Transylvania found just that, people with honest and open hearts. We know Szentegyhaza is a place where members of First Unitarian will always be welcomed. Here are the stories of just some of the lovely and interesting people in the village. 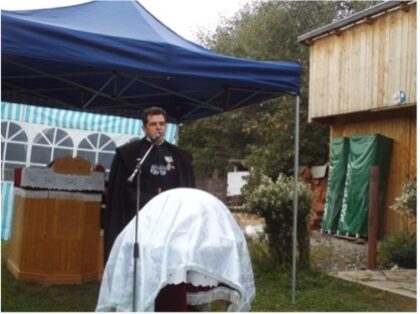 The congregation is led by Rev. Szabolcs Kelemen. He is married to Eniko and has two teenage sons from his first marriage. Reverend Kelemen’s family has strong ties to this part of the world. His family can trace their roots to the 1200’s. He jokes that his wife’s family is a newcomer to the area. They arrived about a hundred years later.

Reverend Kelemen has a vision of building a larger church that can accommodate all the people who are in his congregation. He has developed plans to construct a new Church in town with support from other Unitarian Churches in Transylvania and Hungary. It is through his efforts that our congregation helped finance a bell tower that his congregation constructed and expanded the Church building, which doubles as his family’s living quarters, to accommodate visitors. 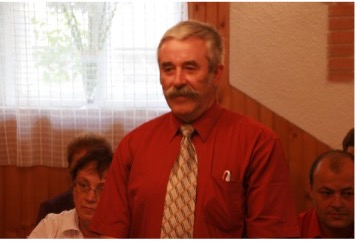 Zoltan Laszlo is the equivalent of our president in our Partner Church congregation in Szentegyhaza. He and his wife, Annushka, have hosted a number of visitors, and each time, their guests come away with fond memories of a short but sweet visit. Zoltan worked at the steel mill in town and knows the danger of working with large equipment: he lost a finger in that mill. He is now retired. Zoltan makes a great effort to speak English, which he learned from watching TV. His attention to the church as he leads the community with the Rev. Szabolcs Kelemen is a labor of love. He keeps the finances in order and the dreams of Reverend Kelemen down to earth. They are a great team. 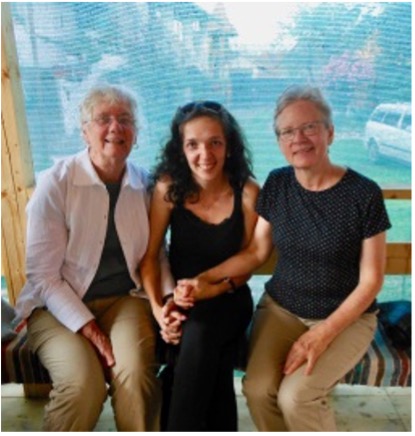 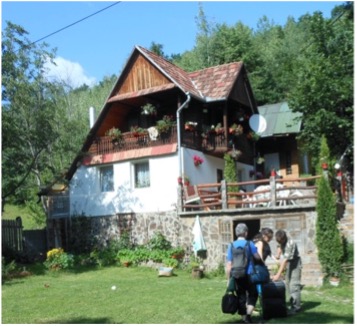 Aranka Horváth and her daughter, Orsolya, or Orsi, pictured to the left, have a summer home that Aranka’s late husband built in the 1990s. This lovely country home, clearly hand-crafted with love and care, is where they spend their summers. It provides a small respite from life in the village. A river runs by the house and there are fields surrounding the country home. Her three cats and two dogs also cherish this place. Aranka is a nurse and works in a nearby clinic. When visitors come with a cough or cold, she is there to heal, as she does each day at work. Her daughter, Orsi, is now a university graduate and translates for visitors; she speaks impeccable English. However, due to lack of employment in the village, she travels to Budapest to work for the Viking Cruise Ship line. She is learning German to improve her career options. She travels widely and enjoys her life, even though she has not had the economic opportunities one would expect for a university graduate. Orsi is now married to Orban Levante and we wish them well. Aranka’s daughter-in-law, Emilia, also fills in as translator. She is a cheese maker and tends her goats carefully, as they give her the resources to produce some of the best cheese in the area. 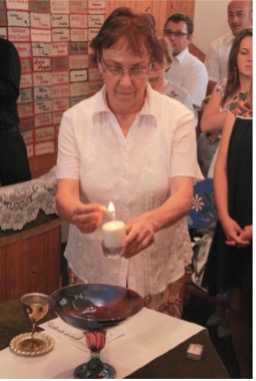 Ibolya Fartu is the president of the Women’s Group at the church. She and her husband live in a brick apartment building, a Communist-era structure that is nondescript and dim. A few years back, the couple bought a piece of land at the edge of the village and created a respite in stark contrast to their home. Their Garden of Eden is absolutely beautiful, resplendent with colorful flowers and plants, as well as a wide range of fruits and vegetables. There, one is free to relax in a lush, natural setting. They built a small cabin, so at times they spend the night there. Many visitors have enjoyed this enclave in the middle of the village and toasted to those who have gone before with the traditional drink of Palinka, homemade brandy.

Livia Vidám (The picture is when she was younger) is a twenty year old young woman from Szentegyháza. She is an only child and has lived in a flat with her mother and father. Her mother works as a fitter/cutter, and her dad works making household accessories. They are employed in two different cities, about 30 minutes from their home. Their work schedule is hard for them because of the travel.

Livia is studying in the Protestant Theological Institute of Cluj-Napoca (Kolozsvár). She has been studying for two semesters and she loves it very much. The university teaches people of many faiths and they don’t have any concerns with this. She says, “We look like a big friendly team, who fight for peace, love, and unity”.

In spite of the hard work, she says she is in the best place. She would like to be a minister to serve God and the people around her. 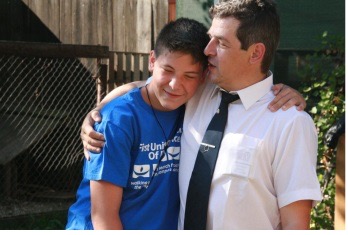 Emre Kelemen is pictured with his dad and indeed, is his father’s son, a teen full of curiosity and energy. He lives with his mother in Kolozsvár, but spends as much time as possible in Szentegyhaza with his Dad, the Rev. Szabolcs Kelemen, and his step-mom, Eniko. He is an affectionate and thoughtful person, as happy to engage in a game of basketball as he is to join in a traditional Hungarian folk dance. Eniko, Szabolcs wife, is clearly very attached to Emre. To see them in the kitchen happily preparing the supper meal is charming. They do their best with English and promise, as we visitors do, to learn a few more words for next time.