Transylvania, meaning “beyond the forest” is an historical region in the central part of Romania, bounded on the east by the Carpathian Mountain Range and the south by the Transylvanian Alps. The region of Transylvania is known for the scenic beauty of its Carpathian landscape and its rich history. While it is part of Romania today, it was once part of Hungary and Transylvanians value their Hungarian heritage. 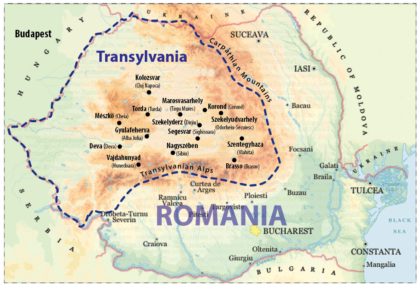 Why a Partner Church in Transylvania?

Our partnership with the Szentegyhaza Unitarian Church began two-fold. First, we were exploring a partnership in Transylvania and second, we wanted to discover where Unitarianism began in the 16th century. What we found was a warm and engaging congregation that welcomed us enthusiastically and continues to share their friendship with us in many ways. We made many trips since then with help from the UU Partner Church Council (UUPCC) which arranges a pilgrimage introducing us to the various sites of Unitarian history and other historic sites in Transylvania. To involve more of our congregation in the partnership, one Sunday a year is dedicated to Partner Church Sunday with songs, stories and messages from each congregation usually followed by traditional foods at coffee hour or a light lunch followed by video presentations of trips and Unitarian history. This year the Transylvania Partner Church Committee has been meeting with our partner church congregation via Zoom monthly. It feels like we have family half-way around the world.

The Kopjafa (on the left, above) or memorial post in our memorial garden is a gift from our partner church acknowledging their gratitude for our friendship.

In 2008 we hosted a visit from their minister, Rev. Szabolcs and their president Sandor Radz. We made additional trips to our partner church in 2012, 2015 and 2019.

1921   First Congregational, now First Unitarian, establishes a partnership with a church in Transylvania.

1945   WWII causes relationship to cease. The fall of Romania to Communism further suspends the relationship.

2006   First Unitarian members travel to Transylvania to explore possibilities of a partnership.

2007   First Unitarian congregation votes to establish a partnership with the Unitarian Church in the village of Szentegyhaza.

Origins of the Unitarian Religion

The origins of the Unitarian religion began in 1568 with the Edict of Torda when Francis David (left), a self-declared Unitarian believing that God is one, convinced the king of Transylvania at the diet, where the religions in the area debated to be the only religion, to declare an edict of religious tolerance. It became the first such proclamation anywhere in Europe.

Trips to our partner church include a pilgrimage to most of these historic Unitarian sites: