Phil Gruppuso practiced pediatric endocrinology for 30 years, during which time he was also a physician-scientist and medical educator. At present in semi-retirement, he spends most of his time as a woodworker and musician. Phil carved the podium and chalice stands in our Meeting House. 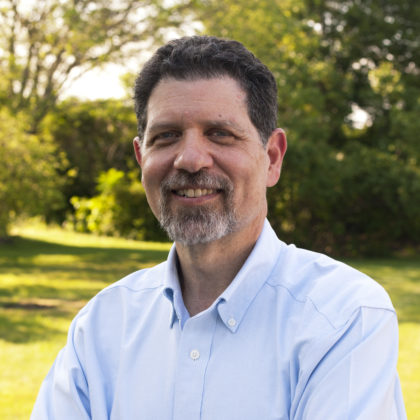 I’m not a member of this wonderful church – in fact, I’m not a Unitarian Universalist – but I know that UUs care about one’s personal journey. So, today I’m going to talk about a part of my career as a pediatric endocrinologist that was a personal journey, the impact of which changed my view of science and medical dogma, what it means to be a caregiver, and, to paraphrase the Hippocratic Oath, what it truly means to do no harm.

I’m sure many of you have visited a newborn nursery – maybe because you were a new parent, or a grandparent, or a friend or other family member had a new baby. You probably noticed that the babies were wearing hats to keep their heads warm. Blue hats for boys and pink hats for girls. What most people don’t know is that nurseries also keep white hats on hand.They’re for the babies who can’t be identified at birth as male or female.

I spent just over thirty years as a practicing pediatric endocrinologist here in RI. Like other ped endos, I was a go-to person whenever a baby was born and the people in the nursery couldn’t tell if it was a boy or a girl. You might think this hardly ever happens, but it’s not that rare. In any given year in RI, with its 10,000 or so births, there would be at least a few such babies born.

As I’m sure you can imagine, the birth of one of these babies is a trauma for their parents and families. When you have a baby (or, these days, when you’re going to have a baby), what’s the first thing everyone asks, even before asking if the baby is healthy or how much they weigh? Is it a boy or a girl?

This binary view of sexuality shaped how pediatric endocrinologists and surgeons approached babies with what used to be referred to as “intersex.” When I was training as a ped endo in the early 80s, here is what I was taught about how to take care of these babies:

First principle: A baby’s gender can be assigned at birth – presumably by a doctor – and as the baby grows up, they’ll accept whatever gender is assigned. The gender assignment should be based on what the medical diagnosis predicts, but also whether or not surgery can be done to make the baby’s genitals look normal. And looking normal is critical to the baby becoming a child who views themself as a boy or girl.

Next principle: A baby who is raised as a male but has a small penis will lead a life of shame and loneliness. This meant that surgery almost always involved removing tissue because surgeons could make a small phallus smaller but not bigger. In other words, when babies were born with a phallus that was half-way between a clitoris and a penis, the baby would be assigned female and the phallus would be reduced in size – or, if you go back to the 1950s and 60s, it would be removed. To be clear – all of the physicians and psychologists who put forward this approach were men. It appears that none ever bothered to ask any women how much size really matters.

The last principle, a critical one, was the idea that the assigned gender would only be accepted by the individual if the baby was raised unambiguously. This led to some things that were routine and, now, through the lens of time and ethics, seem pretty shocking:

As you can imagine, all of this led to a culture of shame. And implicit in the approach was that any failure of the child to accept their assigned gender was the fault of the parents. All of this was what I was taught to do, and I didn’t question it. After all, the basis for it seemed irrefutable. A famous sexologist, John Money, had reported many times over the perfect case to justify an unambiguous and irreversible sex assignment at birth. He had taken care of a baby boy whose penis was accidentally destroyed during a circumcision. The baby was an identical twin – so Money had a control subject, if you will. Because the baby’s penis was gone, Money assigned female gender, then reported in over 80 articles and book chapters, that everything had worked out just fine. But in 1997, the reality of the case was made public – the person in question, John/Joan, was living as a thirty-something married man and father.

A couple of years before the John/Joan case became public, I was approached by a Brown professor of biology and anthropology, Anne Fausto-Sterling, about a teenager who had contacted her. This teenager had been born with ambiguous genitals and had been assigned female. Now, at the age of 13, she was being forced to take estrogen. This was more than upsetting, because she knew she was a he. A case like this hadn’t ever been reported, but Anne, along with many of her colleagues, suspected that the John/Joan case was an illegitimate basis for a flawed approach. Long story short – I helped Matt switch to male. In the course of all of this, Anne introduced me to the founder of the Intersex Society of North America, Cheryl Chase. I was the first pediatrician to sign onto Cheryl’s advisory committee, and I brought her to a meeting of the pediatric endocrine society. That caused quite a stir – that’s an understatement – but the next year, Cheryl was asked to speak. She told an audience of 300 pediatric endocrinologists that one of their most respected colleagues had arranged for her clitoris to be removed when she was an infant. The discussions that ensued were painful for the community of ped endos, but they resulted in the standards of care being changed over the next ten years. Those being trained in our discipline are now taught that they should be truthful and that an assigned gender may be the wrong one in as many as a third of patients. It follows that irreversible, appearance-altering surgery is not an emergency. It should be delayed until the child has developed into a boy or a girl and can assent to the surgery.

One reason I chose this subject for today is that my experience relating to sex development shaped who I was as a physician and as a care giver. Perhaps the thing that changed me the most was getting to know and work with some remarkable people, none of whom were physicians. As you probably know, doctors mostly learn from other doctors how to be doctors. I think there’s a better way. I already mentioned Anne Fausto-Sterling. Getting to know Anne and her work taught me just how much the humanities could tell us about how to care for our patients. Anne knew what was right in a field that was the domain of some very powerful physicians and psychologists who were the recognized authorities. She knew because she knew the science of human sexuality and the historical context.

I also mentioned that Anne introduced me to Cheryl Chase. (That’s a pseudonym by the way, one of several that she’s used in her career. Cheryl’s real name is Bo Laurent.) I think Bo is a genius. She graduated from MIT as a mathematician, then went on to work in Japan as a computer programmer when that was a new field. Then, later on, she decided to deal with what I guess was the most challenging thing in her life – knowing her identity and dealing with the harm that had been done to her. The result was a powerful advocate who changed a field of medicine and saved many, many people from a great deal of harm.

The third person who helped me on my journey was Alice Dreger. Alice is a medical historian and ethicist. She’s also a wonderful writer with a sardonic but hilarious sense of humor. With Alice’s help, I realized that I’d been blindly obedient to my medical predecessors and their dogma. History can put things in perspective. In her book, “Hermaphrodites and the Medical Invention of Sex,” Alice used historical case studies to tell how we got to where we were. By the way, this history included a pope who was a biological female. Beyond this whole subject, if you want a stimulating view of scientific controversy and the meaning of intellectual freedom, read her more recent book, Galileo’s Middle Finger.

Back to why I chose to talk about this today. This experience of mine exemplified for me the importance of recognizing the autonomy of the individual, and to do so on the basis of scientific facts and standards of ethical behavior. I can’t help but think about this in the context of the current political climate. To deny a rational approach to gender self-identification and sexual orientation is to take an approach that belies science, facts and basic human dignity. In my mind, it’s is right up there with:

So, the next time you hear someone say that if you’re not a heterosexual man or woman you’re not normal and you need to be fixed, you can remind yourself that the science says that view is a bunch of hooey. We are meant to figure out, during our time as children and adolescents and adults, who we are and who we want to share our lives with. To deprive us of that opportunity is to take away that most fundamental right to live our lives as the person we are.

As I mentioned in my opening, I’m not a UU, but my wife Martha, who is, tells me that UUs care about one’s personal journey and personal discovery. Martha also told me about the principals of Unitarian Universalism: the inherent worth and dignity of every person, the importance of justice, equity and compassion in human relations, and that there should be a free and responsible search for truth and meaning. In retrospect, I think these principles were what motivated me to change my approach to infants and children with differences in sex development.

Maybe I’m more of a UU than I thought I was.