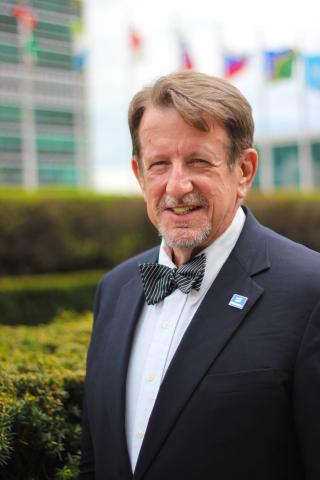 Bruce Knotts is the Director of the Unitarian Universalist United Nations Office. He joined the Department of State as a U.S. diplomat in 1984. In 2004, Bruce was elected to the Board of Gays and Lesbians in Foreign Affairs Agencies (GLIFAA). Bruce retired from the Foreign Service in 2007 and joined the Unitarian Universalist United Nations Office as its Executive Director at the beginning of 2008.

I am delighted to be back here after such a long time.  I want to begin my talk with perhaps the best book I’ve ever read: How to be an Antiracist by Ibram X Kendi.  I don’t want to give too much away, but the author deeply discusses bigotry based on race, gender and all other forms of racism and bigotry.  He begins his discussion of gender with the wedding of his parents:

“It was early August 1976, the Tuesday before the Saturday my parents were scheduled to wed. Running down the ceremony, Pastor Wilfred Quinby recited the Christian wedding vows for my parents. “Husbands, love your wives, and wives, obey your husbands.” “I’m not obeying him!” Ma interjected. “What!” Pastor Quinby said in shock, turning to look at my father. “What!” Dad said, turning to look at my mother. “The only man I obeyed was my father, when I was a child,” she nearly shouted, staring into Dad’s wide eyes. “You are not my father and I’m not a child!”

Ibram’s Dad proposed, “How about: Are you willing to submit one to anther?”  His mother agreed.  She had been rethinking Christian sexism.  She rejected the patriarchal ideal.

“Black queer activists, too, had been marginalized after they launched the gay-liberation movement” “Frances Beal, audaciously proclaimed in 1968, “the black woman in America can justly be described as a ‘slave of a slave,’” the victim of the “double jeopardy” of racism and sexism.”

I want you to read this book, as I don’t have time to read it to you here.  I hope I have established that sexism and racism exist and that both are wrong and need to be defeated.

We know that in this country and in many others, women and the feminine in general are relegated to inferior status, inferior in pay, in responsibility, and in all aspects of life.  We pay a heavy price for this marginalization.  All of us suffer no matter what our gender, because when any of us is excluded or marginalized we all suffer.  Together with people of color, women and the feminine are everywhere subjected to violence.  When I refer to women and the feminine, I mean that feminine gay men are subjected to more violence than masculine gay men.  Wherever the feminine appears, there is irrational violence.  I want to spend the rest of my very limited time talking about six remarkable women in the order that I met them:

Each of these women went far beyond all expectations of what they could do.