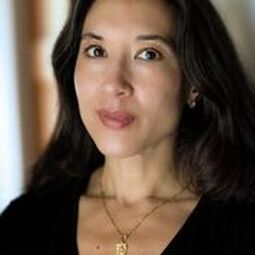 Tina Cane serves as the Poet Laureate of Rhode Island, where she lives with her husband and their three children. She is also the founder and director of Writers-in-the-Schools, RI and is an instructor with the writing community, Frequency Providence. Her poems and translations have appeared in numerous publications, including The Literary Review, Two Serious Ladies, Tupelo Quarterly, Jubliat and The Common. She also produces, with Atticus Allen, the podcast, Poetry Dose.

Cane is the author of The Fifth Thought (Other Painters Press, 2008), Dear Elena: Letters for Elena Ferrante, poems with art by Esther Solondz (Skillman Avenue Press, 2016) and Once More With Feeling (Veliz Books, 2017) and Body of Work (forthcoming in 2019, Veliz Books). In 2016, Tina received the Fellowship Merit Award in Poetry, from the Rhode Island State Council on the Arts.

A Sermon by Tina Cane

(author’s note:  this piece is spaced in accordance with my recitation style)

To listen to Tina’s present Part 1 of her sermon, click on the arrow below:

outside of something      that they perceive to be intimate and powerful

that people turn to spiritual practice

I have found some of those in poetry

This is what you shall do: Love the earth and sun and the animals, despise riches, give

alms to every one that asks, stand up for the stupid and crazy, devote your income and

labor to others, hate tyrants, argue not concerning God, have patience and indulgence

toward the people, take off your hat to nothing known or unknown or to any man or

number of men, go freely with powerful uneducated persons and with the young and with

the mothers of families, read these leaves in the open air every season of every year of

your life, re-examine all you have been told at school or church or in any book, dismiss

whatever insults your own soul, and your very flesh shall be a great poem and have the

between the lashes of your eyes and in every motion and joint of your body.

a very poem of life     a rich manifestation of humanity

in real-time at distances     too vast and paralyzing for any meaningful action?

I wish I knew.

To listen to Tina present part 2 of her sermon, click on the arrow below:

Recently, I’ve been spending time with a particular stanza by W.H. Auden,

All I have is a voice

To undo the folded lie,

The romantic lie in the brain

And the lie of Authority

Whose buildings grope the sky:

There is no such thing as the State

And no one exists alone;

To the citizen or the police;

We must love one another or die

commentary on     the ineffectiveness of poetry     to have made any impact

perhaps  because enough time had passed     perhaps     because he wanted to

pinning down and expressing my beliefs       needlessly-problematical

I believe that poetry saves lives—not the way that paramedics do, as

slowly, over time, poetry can alter the texture and course of a life—and that change can

to consider more deeply our experience in the world and to cultivate connection.

If, as Socrates said, The unexamined life is not worth living—then poetry

can only enrich us, because the effects of an unexamined life exert their own kind

remedy—but which undermine as steadily as any pathogen.

I believe that just as everyone should have an annual check-up, we should

once a year–for there is a poetry out there for each of us, for every day of our lives.

practice that, for some, might conjure a 19th century lady sprawled on a fainting couch—

snowflakes or butterflies. But I believe–to quote the intrepid explorer Ernest

are among the most resilient, determined people I know–because writing poetry is really

an attempt to engage intensely with humanity, and to embrace what John

Keats called negative capability—which is the ability to endure uncertainty and mystery,

to accept not having answers. I believe that presidents, like Abraham Lincoln,

as leaders–in an uncertain world–for having grappled with meaning and nuance,

for having tackled intricacy of thought, and for attempting intimacy through words.

So, the day before I was to submit this piece      seventeen people were murdered

at Marjory Stoneman High School in Parkland, Florida     and like everyone

following email      in which I think I get closer to my real point:

to air during National Poetry month. I did and I think, at its heart, is has to do

with resistance. The illness at the core of this seemingly global tilt towards

nativism, fascist tendencies, and general hostility seems to me about alienation—

the breakdown of connections between communities and individuals. For all our

supposed connectedness through digital media–some of which can be very

positive–people on the whole are increasingly lonely and isolated. The boy

joining ISIS and the boy shooting up the movie theatre are not so different.

different; they prey on people’s yearning and purport to give them purpose.

The only way to collectively resist, the only practical way to resist–other than

as individuals, in our families, in our workplace, as poets, as people. When

people feel connected to other people, they see more clearly, they stay open,

they tend towards reciprocity. This makes it more difficult for them to shun their

neighbor, to shoot a child. I do believe that poetry saves lives. But it’s people

really. Because people make the poems. For other people.

P.S. I was stuffed up when we recorded so I am kind of whispering,

because I was afraid of snuffling into the super sensitive mic 🙂

So, there’s a line from that Auden poem which keeps coming back to me:

how devastating to be silenced     whatever the circumstance

and that    to silence is to make unequal

so that perhaps fewer people would die down the line

To listen to Tina present part 3 of her sermon, click on the arrow below:

So, my only real experience with organized religion came in the form of Quaker

when children mustered the courage     to break the silence and speak

away from the truth of our voices

So, my years teaching at this school    were a kind of second education

urged even   to share your message privately with someone after meeting

of being a woman:

I commit to reading accounts of the torture before the beheadings

as a form of emotional engagement with world turmoil     a juncture

women as men’s vision of the female version of themselves

the body of each man as my own

So, the public high school I attended in the Bronx     was nothing like the private

post-it in my wallet  for months

See, I had been meaning to write Mr. Kopelman a letter     not because I knew

seen Mr. Kopelman up close   in all our years    from what I could tell    across the

immense auditorium      he looked kind of like my Uncle Marty

he doesn’t really know  and…

know,” I said “I mean, I like English and I love my friends…”

“I see you’ve managed to keep a B average without being here most of the time.

And it says here    you are going to the University of Vermont     Is that true?”

paper on a stack, “You can go back to class now”

So, when I was allowed to receive my diploma at the Felt Forum in Madison Sq.

of teaching that I came to realize that Mr. Kopelman was not just reading my

I procrastinated and missed my chance to write  to Mr. Kopelman —so I am

prompted    Mr. Kopelman would have not have remembered me     and my

So where am I going with this?

What Mr. Kopelman gave me was another chance to do so

important for me to honor my luck

and for us to practice compassionate judgment    born not from authority

to seek them out

To listen to Tina’s present the fourth and final part of her sermon, click on the arrow below:

So, when asked to give a title to this service, I called it  “The One Living Poem”

definitively a poem   is if the poet    says so

What if we built our lives the way a poem is sometimes built?     Not through

sentimental yearning or deep thoughts      but through a precision of intention

accomplishments     and seek a system?     a coherence of purpose ?

desired intention?      what messages do the disparate fragments hold?

strive for a leaner integrity   of expression and purpose?

the world needs more of this        ……but important questions persist

as I wrote in one of my own poems:

anything     with which I am reluctant to part