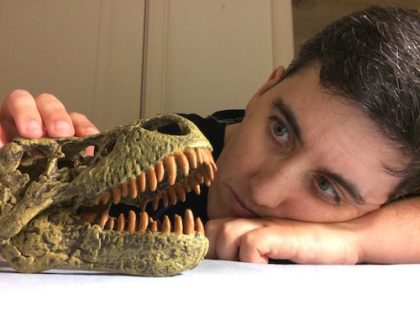 Rex LeBeau lives in Newport and attends Channing Memorial Church. A lifelong and sixth-generation Unitarian Universalist, they lead Channing’s LGBTQ+/Allies group, Interweave. Rex draws the comic “Transosaurus Rex” for Options Magazine, and in their spare time they enjoy dancing in their inflatable T-rex costume for the amusement of small children.

I pedalled my bike down the dark road.  Stars out.  Moon full.  Will they still be at the beach?  I’d just returned from facilitating a support group for nonbinary people in Providence, hoping to catch the last of the July mOOn crOOze – a rumpus ride through downtown Newport and around Ocean Drive, stops for rests and other things, culminating with a dip at Reject’s Beach.  My destination.

The stocked bike racks and remnants of glow sticks gave the answer.  I racked my bike and ran down the path to the beach, high fived my friends, striped off my clothes, and ran naked into the surf.  I’d swum here the day before with swim trunks, but this would be my first time skinny dipping in a public place, with random people, in this new chest.  The vulnerability scared me, sparking the goal to do it.  Now, swimming in the cool water under the moon’s glow, the fear subsided and I shouted to the night, “I FEEL FREE!”

Go back 34 years, to another time I was naked and vulnerable.  Like what happened to most of you, someone decided they knew what my tiny body signified.  Assign that mark on the birth certificate and a name to go with it.  That’s who’s entered the world.  A stamped official predetermined path before I could even smile.

What were you told about your identity?  Maybe your career path, religion, or what sort of person to marry?   Did that resonate with you?  Did it become your truth?  Controlling our destinies with these assignments might seem to come from a place of love.  “We only want what’s best for you.”  In reality, these identities can trap us in shame if we feel they don’t fit.

I ditched the name first.  When I was a little kid I loved dinosaurs, my favorite being Tyrannosaurus Rex.  I played with dinosaur toys, roared at my younger siblings, and stomped around the playground snarling.  When I was 7 or 8 I decided to change my name to Rex and it stuck.  Maybe my siblings thought I’d bite them if they didn’t do as I asked.  Nah, they knew the name belonged.

Gender proved much tougher to resolve.  I had all the classic symptoms of extreme gender dysphoria as a kid and teenager, but I thought only two genders existed.  While I behaved and dressed like a little tomboy, I did not feel like I was an actual boy.  Guess that makes me a weird person?  Okay, we’ll go with that for now.  Feeling mixed up about gender and a dose of asexuality made crushes few, far between, and never reciprocated.  Until I fell head over heels for a woman at age 24.  She was straight so it didn’t go anywhere, but now this surprising queerness caught me in a crisis.  “Where the hell did this come from?  Does this mean I’m bisexual now?  Why didn’t I know sooner?”

I’d always tried to listen to myself and do what I felt was true.  Not everyone can do that, by the way.  Lots of people try their best to conform to what’s expected, to what’s considered normal.  Life can be much safer like that, and certainly less lonely.  I thought my gender assignment was nonnegotiable unless I thought I was “trapped in the wrong body.”  I knew I was different on some level, just not how.  I coped by presenting in ways that felt right.  Short hair, boy’s clothes, a few years of wearing a cap.  Twelve-year-old me looked like part of the cast of Newsies.

The bisexual identity didn’t last long.  After reading an essay on the character Lois from Alison Bechdel’s comic Dykes to Watch Out For, I learned the term genderqueer.  Ah ha!  A gender not male or female.  That is real.  That is true.  That is me.

This Holy Grail, this missing piece, it explained everything.  Why I didn’t feel like a boy even though I behaved in a boyish way.  Why bisexuality didn’t resonate.  Why I hated being referred to as “she” and found being called “he” hilarious.  Such relief washed over me.  I wasn’t alone anymore.  With this word, this identity, I used it to connect to others who felt similarly.  Books, podcasts, support groups, Facebook pages, Instagram, YouTube.  I gobbled up information like a starving T. rex.

I left behind those two binary gender options western society so stingily assigns and concentrated on being me.  To say my clothes are my clothes, not men’s clothes or women’s clothes.  To see my body as just fine, removing the gender distress around my body’s quirks.  With this freedom I could breathe deep and love from a place of truth.  The kinship I felt with other gender-diverse people revolved around rejecting gender norms and forging our own paths.

I chose new pronouns.  Hearing they/them felt good and played into the all and nothingness I felt around my gender.  When laws changed and more health insurers began to cover gender-related procedures, I sought top surgery.  Satisfaction left my voice, body hair, and clothing relatively unchanged.  For now.  The future may hold more searches for a deeper truth.  Such freedom to explore is scary.  Seeing what’s possible can be very scary.  Imagining that new future and moving toward it defies everything our society ingrains in us from birth.  And it’s delicious.  I could never go back.

When we are not given all the possibilities up front, we have to figure them out.  It can be a matter of luck whether the right information presents itself at the time we need it.  Some people don’t figure out their gender until late in life.  Some people know their truth but never find the courage to act on it.  Our western culture embraces the gender binary with patriarchal fervor to maintain the power of certain types of people.  If you’re not in the charmed group, welcome to being subhuman and unseen.  Objectified and exploited.  The freedom of queerness, transness, comes at a cost.

Leaving the pack to journey into the unknown territory of individual gender can be lonely and downright dangerous.  People who’ve known me for years now find me strange and perplexing.  For a time, my mom acted like I’d died.  I’m misgendered on a daily basis despite being very open about my gender and pronouns.  Online dating is almost impossible.  I wonder if I’m welcome at queer womxn events (womxn spelled with an X).  I receive unsolicited tips on being more masculine.  All references to the gender binary erase me.

Shifting to a more inclusive world that fosters discovery takes time.  It’s not easy to go from prioritizing being safe to being whole.  To reject labels and demands in favor of tools to learn to make our own choices.  Think of all the places you see gender.  Places like documents, clothing, magazines, and sports teams.  Why is it there?  What if it wasn’t?  Think of the binary gender references you use, words like mankind or congresswoman.  What if we used words like humankind or congressperson instead? Breaking down the gender binary starts with language.  What if we didn’t assign gender at birth and kept those options open?  (Think of all the money we’d would save in updating government documents!)  What if being human mattered more than adhering to a gender construct?

We can create a world where the freedom to explore is normal.  Where it’s okay to be figuring things out.  Where it’s okay to change.  Creating this world will take effort.  When we change so that others can walk the earth a little easier, we play a part of a great love that has the power to hold us together, making us a little stronger and freer.

We can create a world where we can all swim in the ocean on a moonlit night and howl with joy.