The interfaith Guns into Plowshares project generated a variety of local press coverage, including a newspaper article, an op-ed piece, and television news coverage.

An article about Guns into Plowshares with multiple photos appeared in the Monday, May 14, edition of the Providence Journal. Written by staff writer Alex Kuffner, the article covered the Sunday service in which a gun was dedicated to become garden tools, the letter writing to state legislators that followed the worship service to support three bills currently before the lawmakers, and the interfaith connections that the project has generated.

To read the full article and see the photos, click here.

An op-ed article on Guns into Plowshares, a project initiated by Rev. Liz Lerner Maclay, recently appeared in the Providence Journal. Written by Rev. Maclay, the article was also signed by clergy from other faith traditions throughout Rhode Island whose congregations are participating in the project.

This multifaith movement that supports gun safety legislation in Rhode Island kicked off on Mother’s Day weekend by re-dedicating disabled firearms that will be transformed into garden tools or works of art. Parishioners from around the state then wrote letters to state legislators in support of three bills currently before them on gun safety legislation. To read the complete article, click here.

NBC 10 WJAR in Providence sent reporter Mario Hilario and a camera crew to First Unitarian Church on Sunday, May 13, to cover the letter writing campaign underway in the Parish House as part of the Guns into Plowshares project.

The congregation generated more than 800 letters and cards to state legislators in support of three bills currently before the lawmakers that would ban assault rifles, guns in schools, and high-capacity gun magazines in Rhode Island.

Four city houses of worship will celebrate turn “Guns into Plowshares” weekend with prayer and presentations of decommissioned firearms that will be transformed into garden tools by metal artists working at The Steel Yard in Providence.

The four faith communities participating in this event are First Unitarian Church in Providence; Temple Beth-El; The First Baptist Church in America; and Central Congregational Church. 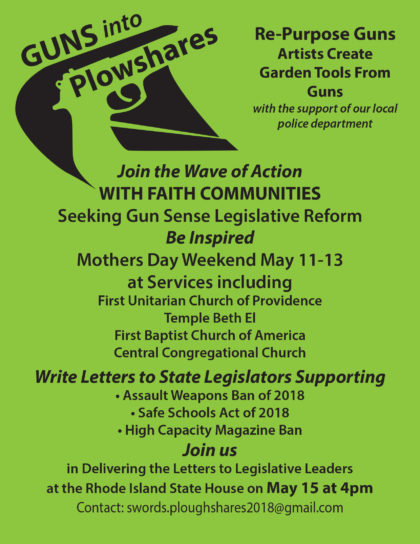