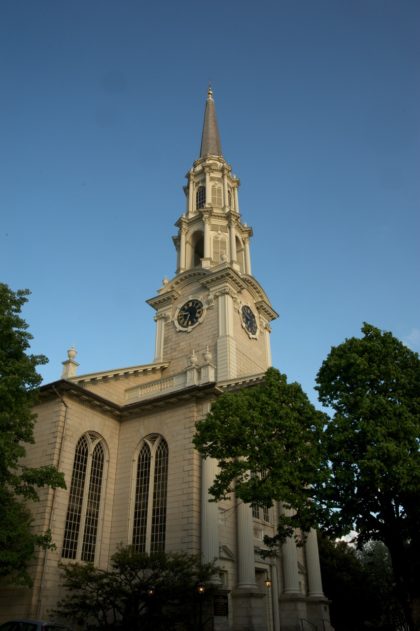 On October 30, 2016, we celebrated the 200th anniversary of our historic Meeting House. It was a significant milestone for the congregation, and is a prelude to our celebration in 2020 of the 300th anniversary of the founding of our congregation. Members friends and guests filled the pews, including the President of Brown University, who carried on the tradition of her predecessors from the original dedication in 1816 as well as the 100th celebration in 1916.

The service included tales of the meeting house dedication only 18 months after the second building burned to the ground, recounted by parishioners playing the roles of notable congregants of the day reading their words from the pews where those congregants sat each week.  After a party in the Atrium, the chandelier in the Meeting House was lowered to the floor, where the youth replaced burned out bulbs, which had been done each Christmas Eve in recent decades.

An Overview of the Meeting House

The building, our third meeting house, was designed by Providence native and church member John Holden Greene, following the destruction by fire of the second meeting house. Dedicated on October 31, 1816, the dressed granite structure houses an elegant sanctuary dominated by a raised mahogany pulpit. Four colossal fluted columns support a balcony around three sides of the space and a shallow dome from which a three-tiered, gilded chandelier is suspended. Two-story arched windows flood the sanctuary with light. Boxed pews are divided by three aisles, the center aisle ending in a broad semicircular pew. The balcony opposite the pulpit holds a pipe organ, installed in 1968.

The largest bell ever cast by the Paul Revere foundry hangs in the 189-foot steeple.

The interior of the Meeting House has been renovated a number of times over the years, most dramatically in the 1860s when the clear glass window panes were replaced by tinted, diamond-paned glass and gilding was applied to the columns and dome. Later, two memorial stained-glass windows were installed through a parishioner bequest. Only the gilding remains today: for the 100th anniversary in 1916, the interior was restored to its earlier Federal style. The building was again renovated for the 150th anniversary in 1966; unfortunately, lightening struck the steeple the following year, causing major fire and water damage. Immediate and comprehensive reconstruction restored the building to its previous state. It remains a beautiful and inspiring setting for worship and a source of pride for the congregation.

Parish House, Atrium and RE Wing 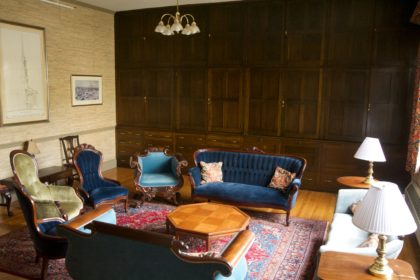 In addition to the Meeting House, the First Unitarian campus includes a second building immediately to the east which today includes our Parish House with multiple parlors and a spacious kitchen, a large, bright 2-story atrium, church offices and conference rooms, an auditorium / theater on the second floor, and the RE Wing with numerous classrooms and resource spaces.

The original Parish House, a massive granite structure, was build in 1875 and for years served all the needs of the congregation beyond the Meeting House.  In 1955, the congregation purchased the property immediately to the east of the Parish House to provide for expanded RE space.

In 1998, the decision was made to demolish the old RE structure, and build a new building contiguous with the old Parish House where expanded facilities for RE, meetings, offices, and reception space could be housed.  Parts of the eastern side of the Old Parish House were reconfigured in this construction effort, a bright atrium was built for receptions and art space,  and an entire new accessible RE wing was constructed.